In genealogy we have a rule, often not adhered to, that to declare something true; a relationship, a date, an event; one needs to have "primary evidence." That is generally understood to be a document prepared at the time the event occurred such as a marriage certificate, birth certificate, obituary or the like. "Secondary evidence" is grandpa Herman's memory, aunt Bertha's hand typed family history, or an entry in a historical book some years after the event occurred. Secondary evidence is often a good place to start, but is always suspect.

The early history of the Fair Oaks Bridge could benefit from some of this rigor. In the five or so years that I have been involved in cataloging, researching and reading accounts of Fair Oaks history, I keep noticing discrepancies in the history of the Bridge; in written history, notations on photos and even on the Internet (Wikipedia has a section on the history of the bridge). By some accounts the bridge was built about 1902 (wrong year), was destroyed by a flood in 1906 (wrong year), a temporary bridge was built and washed out the same year (it was the following year), a ferry was built following the washout of the temporary bridge (wrong sequence) and a new bridge was built in 1908 (mostly but not finished until 1909).

After catching myself stating some of these "facts" in my published Chronology of Fair Oaks History on this website, I decided to find a first hand account of the early history of the bridge. The easiest "primary source" to obtain the information from is the local newspapers of the period. I started down at the State Library Microfilm Room with the Sacramento Bee since I had a fairly good idea of when the bridge was washed out, and that worked pretty good for awhile. However, since the Bee was a daily paper of usually eight or more pages, I would have had to plow through over six hundred papers to find all the information I wanted, so I settled for scanning the front pages. After I exhausted that source, I noticed that Folsom published a weekly newspaper during that time (The Folsom Telegraph) which covered events in the Fair Oaks Colony. And, there was a bi-weekly Fair Oaks newspaper, the Fair Oaks Citizen that published during the time of the washout and rebuilding of the temporary and new Fair Oaks bridges. Those are my primary sources, and I will heavily annotate the history below with specific references.

The original Fair Oaks bridge was lobbied for by the residents of the Colony in 1900, construction began in January, 1901, and the bridge opened for use in March, 1901 (1). The spur line of the Sacramento – Placerville railroad was extended to the Fair Oaks Bridge on June 1 (2), enabling the new Colony to ship the produce of their recently planted orchards to market and travel easily between Fair Oaks and Sacramento.

Six years later in floods the height of which hadn't been seen before, the piers of the first Fair Oaks bridge were undermined. The bridge collapsed at 1 am on Tuesday, March 19, 1907 (3). Sacramento City escaped flooding, but many other bridges and roads were washed out, including the Mormon Island Bridge upstream from Folsom (2).

On March 23, 1907, two mail carriers tried to cross the river in a small boat, were swept downstream and drowned, prompting concern from the Sacramento County Board of Supervisors (4).

The Board met to review the countywide damage and decided that the Fair Oaks Bridge was so important to local commerce that a temporary bridge should be built as soon as possible (5). The timetable was 30 days. In the interim, an 850 foot steel cable was borrowed from the Folsom Development Company to use with a ferry boat across the river at Fair Oaks (6). One account has it that the cable broke mid-river and the ferry was abandoned since the temporary bridge was almost completed, but I found no newspaper article regarding the accident.

Work on the temporary bridge was started on April 24, 1907 (7), presumably delayed until the water receded. It was completed on May 4, 1907 (8). We can find no evidence that the temporary bridge collapsed in 1907, as is reported by many recollections, and neither the Sacramento Bee nor Folsom Telegraph report any more flooding in that year. We have a very nice photo of the temporary bridge standing in all its glory sometime in the summer or fall of 1907.

With the water receding and the temporary bridge working fine, there seemed to be no hurry for the Board of Supervisors to act on a new bridge, and with all the other bridge and road repairs needed, they decided to go for a bond election, announced on August 10, 1907 (9). The bond election was held and passed on September 10, 1907 (10). The new Fair Oaks Bridge was estimated at $63,000 (10).

Presumably the contractor needed some time to prepare the materials, and spent time during winter of 1907-08 working on the three piers to support the structure. The Folsom telegraph reported in May, 1908 that great piers of concrete were being erected for the new Fair Oaks Bridge (11).

Nothing was written regarding the bridge during the summer and fall of 1908, so it can be presumed the construction of the bridge was moving along adequately.

On January 9, 1909, the Folsom Telegraph reported that "The new bridge will soon be opening. All of the steel is now in place and grading of the approaches is being done (12)." Evidently the approaches to the new taller bridge involved bringing in tons of rock and gravel and that took some time. 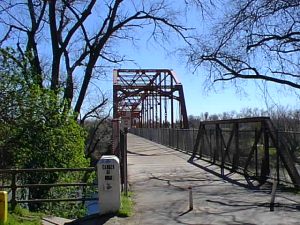 On May 21, 1909, the grading was completed (14) but the paving of the approaches (macadam) would not begin for several months to allow the fill to settle (15). Then they had to build "large concrete bulkheads at each end of the bridge (16)." From the Citizen, September, 1909, "While the road is being finished, traffic will be suspended and the river will be forded a couple of hundred yards downstream (16)."

It can be assumed the work was finished in Fall of 1909, but since the finishing of the bridge and approaches was tediously long, there probably was no official opening ceremony, and I could find no article about a gala celebration.